Mike Albin will take the helm to lead Nevada Griffons for the 2022 Season. Coach Albin started his coaching journey in 2000 as the Assistant C team coach at Emporia High School. After graduating from Emporia State University with a degree in Social Science, Coach Albin moved back to the Kansas City Area and was hired as the Pitching coach and head C team coach at Mill Valley. While there Albin helped develop many pitchers, aiding the Jaguars in their goals of making it to state. Over the next few years Coach Albin would specialize in working with pitchers and catchers while working all over the metro with stops at Turner High School and several other club teams. In 2005 Albin started the Overland Park Diablos Baseball Club, leading them to 4 consecutive top 5 state finishes and a national 150 ranking. In 2010 the organization would expand and Bottom of the 9th Baseball was created. There Coach Albin lead the organization by recruiting and working with high school players to reach their goals of playing baseball at the college level, with 15 of the program's players receiving college offers to play. After a brief stop as the Head Coach at Kansas City Lutheran High School, Albin was hired as a coach and scout for the Puerto Rico Instructional Baseball League in 2019. With COVID hitting the Island hard the season was ultimately cancelled. In 2020 Coach Albin would agree to terms to lead the pitching staff of the Derby Twins in the Sunflower Collegiate League. While there, Albin would establish a reputation for success by leading the pitching staff to 28- 22 record, while earning a 3.81 ERA ( top 25 in the country) and a berth and top 8 finish in the NBC College World Series. Over the last 20 years of coaching, Coach Albin has achieved several national accolades while compiling a record of over 250 wins.  Albin looks forward to the bringing his talents to the Griffons  organization as they embark on a new season.

Aaron Hassell returns to the Griffons in 2022, filling the role of Assistant Coach.  Aaron is very familiar with the Griffon organization, having pitched for the 2019 team and served as a Player/Coach for the 2021 squad.  He is currently an Assistant Coach with the Missouri Southern Lions.  Aaron attended and played baseball at Midland University in NE, and is a graduate of Graceland University in Lamoni, IA.  He is a native of Dallas, TX. 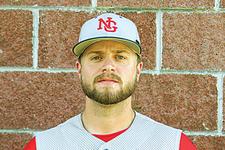