George T. Lyons, a pitcher who played for two major league clubs in the 1920s, was born in Illinois in 1891.  In the early 1920s, Lyons purchased a family farm west of Nevada.  Lyons married a local girl, and moved into town in 1929.

Lyons, whose nickname was "Smooth," was a local merchant, also serving one term as Vernon County Treasuer.  Lyons idolized St. Louis Browns teammate "Gentleman" George Sissler, and loved to tell of confrontations with Ty Cobb and Babe Ruth, among others.  Lyons loved the game of baseball and was always ready to talk about his past experiences playing for the St. Louis Cardinals and St. Louis Browns.

Lyons' fondest memories of his professional baseball career came from his season spent the in Pacific Coast League, where he played for the Los Angeles Angels, winning 49 games from 1921-24.  While in that league, Lyons played the Babe Ruth-led New York Yankees several times.

Lyons passed away at the age of 90 and was laid to rest in Newton Burial Park, located next to the stadium.

As manager of the Nevada Red Sox, a local semi-professional team, Lyons was among those looking for a replacement field for his team after construction of the state hospital led to the demise of the old ballpark, located just southeast of today's Marmaduke Park.  Lyons Stadium was established in 1947 on land owned by the Barton family.  The Stadium was orignally constructed of wood, complete with a roof over the grandstand.  The wooden fences stood approximately eight feet tall, with a center field fence 420 feet from home plate, and a hand operated  scoreboard on the right field foul line.

Lyons Stadium has been home to numerous teams since its construction, including many Little League teams, city recreational teams, the Red Sox, the Nevada Colonels (another semi-pro team) and the Nevada High School Tigers since their program's inauguration in the mid-1980s.  Lyons Stadium has survived a pair of tornadoes, one in 1959, and one just before Griffons' Opening Day in the spring of 1985. 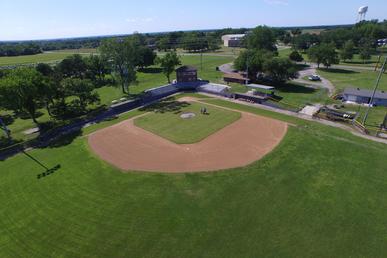 The ballpark, George T. Lyons Stadium, was established in 1947 on land owned by the Barton family. Lyons stadium was originally designed by Lyons himself. (See article below.)

The current field is owned by the Nevada R-5 School District, with maintenance provided jointly by the Nevada Griffons and the school district. The field also serves as the home field for the Nevada High School Tiger baseball teams.  The press box is owned and operated by the Nevada Griffons. It was built in 2002 and is dedicated to Finis Moss.   A pavilion was built for the BBQ Grill and picnic tables in 2010, and in the spring of 2014 new concrete pads for lawn chair seating and to surround the concession stand were added.

The infield turf is Bermuda Grass, and Oklahoma red clay is used for the pitching mound and base paths.  The left field line measures 325 ft from home. It is 312 feet down the right field line, and 400 feet to dead center field.

From the East or West:  Hwy 54/Austin street is the main east/west road through town. From Austin, turn north on Hwy W/North Ash street. Go north on Ash street to Highland Ave (there will be a Fastrip/Conoco station on your left). Turn left (west) on Highland and the baseball field is on your left.

From the North: From Hwy 49, take Highland Ave Exit, turn right. Turn left onto outer road, head south about 1⁄4 mile. Turn right on Highland Ave. Continue on until you come to a stop sign (crossroad is Ash St.) Go through the stop sign. Ball field is on left.

From the South: From Hwy 49, take Highland Ave. Exit, turn left and proceed over highway to outer road.  Turn left onto outer road, head south about 1/4 mile. Turn right on Highland Ave. Continue on until you come to a stop sign. (Crossroad is Ash St.)  Go through the stop sign.  Ball field is on left.